Buy at any good bookshop, download for Kindle or order at Amazon. co.uk or Amazon.com, Amazon.in or (in HK for free delivery) BookDepository.com 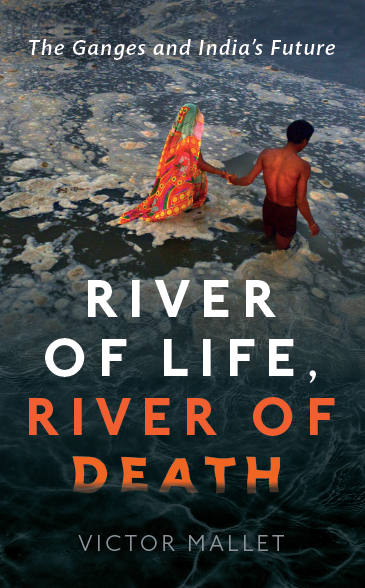 And here are a couple of videos on the Ganges and the crisis facing India’s rivers:

“In prose that is as sanguine and fluid as his subject, Victor Mallet’s River of Life, River of Death charts the course of the Ganges, the spiritual and material lifeline of northern India, through the vicissitudes of time, space and the hubris of men. Rich in detail and sparkling with the insight of a trained observer, Mallet’s chronicle is an engaging and enlightening read.”

“Masterfully combining fascinating history with acute observation of India today, River of Life , River of Death is brilliantly effective in its central argument – that the threats facing the Ganges from pollution, overpopulation, climate change and often bad policies – are also the severest problems threatening India ‘s progress. Mallet is at times brutally realistic about the prospects for rapid improvement, but passionately concerned that success must eventually be achieved . The result is a splendid and important book.”

Adair Turner, Chair of the Energy Transitions Commission and of the Institute for New Economic Thinking

“An extraordinary and fascinating combination of history, geography, environment, politics, religion and much more,  written with affection for and understanding of a country of special importance. This is a river of unsurpassed significance on the world stage, whose flow and life is traced from the Himalayas to the Sunderbans and the Bay of Bengal. Not just the story of  an often difficult past but also of hope for a possible healthy and attractive future.”

“To try and fathom the wonders and follies of India through a river is grand ambition…and Victor Mallet pulls it off!”

Gurcharan Das, author of India Unbound and The Difficulty of Being Good

“Victor Mallet demonstrates vividly why India needs to get to grips with the huge challenge of antibiotic resistance… I hope Mr Modi’s policy advisers read his powerful narrative.”

Jim O’Neill, economist, inventor of the Brics acronym and chair of the Review on Antimicrobial Resistance

“Victor is one of those rare foreign journalists who not only likes and understands India but, in addition, has the capacity to see its faults as well as impartially assess the efforts it’s making to correct them. This means his coverage of India is always informed and thought-provoking. Even when sympathetic he’s never biased.”

▪A “wonderful achievement” – William Dalrymple in the New Statesman

▪The book “marshals familiar facts so compellingly that one comes away with a clear sense of what’s to be done and why we have failed to do it” India Today review.

▪Q&A with author Victor Mallet from The Asian Age, Nov 2017.

▪Hard truths about the environment. Book review on Greenbarrel.com, Nov 6 2017.

My previous book, The Trouble with Tigers: The Rise and Fall of South-East Asia, was first published in 1999. It’s about the modernisation of south-east Asia and the financial crisis that erupted there in 1997.